If you are looking to get the best type of jack to lift your vehicle, one of the most common is the bottle jack. Named so for its similarity of appearance to a bottle, the bottle jack is a hydraulic jack used to lift taller vehicles such as vans, SUVs, and trucks. This is because its height is such that it has difficulty fitting under many types of cars, particularly those that are close to the ground.

So…What is a Bottle Jack, Exactly?

Sometimes called a whiskey jack, the bottle shape contains the hydraulic pump. Although there are some types of bottle jacks that use a screw system instead, so be sure of what it is before making any purchase decision.

The bottle jack works by extending the ram which is located inside the bottle upwards by use of the pump. A flat surface is needed to secure the bottom of the bottle jack. And the top of the ram must fit precisely into the area designated for lifting the vehicle. Once in place, the jack is pumped using a handle which presses the ram to the designed area.

The single action piston presses the ram upwards while holding the contents of the fluid inside in place. Once set, the ram can be locked into position so you can change out a tire. Because of the height of the bottle jack, you can use it to lift even larger vehicles to greater heights if you place the jack on cinder blocks or similarly strong materials.

Once you need to lower the vehicle, you release the pressure provided by the hydraulic fluid. This usually involves turn the handle or activating the release so the vehicle drops back down to the ground.

However, the hydraulic bottle jack is the one that is being considered. This means that if you are thinking about purchasing this type of bottle jack, then you should go over the advantages and disadvantages of having one in your vehicle.

In other words, the hydraulic cylinder is mounted vertically which means that unlike floor jacks that use a hinge, you are pumping the jack upright for maximum efficiency. This means that when placed properly under the vehicle, a bottle jack works easier compared to most other types of jacks.

Because of the hydraulics involved, the bottle jack can lift heavier vehicles easier compared to standard screw jacks. You can lift upwards of 50 tons using a bottle jack, which is more than enough power needed to lift SUVs, pickup trucks, and vans. It is that lifting power that makes it perfect to use when your vehicle is loaded.

The height of the bottle jack combined with its lifting power means that you can lift your vehicle higher compared to standard types of jacks. Greater height can come in handy when placing the vehicle on blocks so you can work on the engine or other components. However, do not get underneath a vehicle that is only supported by the jack itself.

Bottle jacks tend to be less expensive compared to floor jacks. This makes them a great choice for those on a budget. They are also fairly versatile as you can use them to raise vehicles enough to change a tire or higher to do repair work.

With all the advantages that using a bottle jack offers, there are some issues that you need to know as well. You should consider these disadvantages before making the decision to purchase a bottle jack.

Works Only for Certain Vehicles

As you may notice when looking at a typical bottle jack, it does stand considerably taller compared to other types such as floor jacks. The height of a bottle jack precludes it from being used on vehicles that sit relatively low to the ground such as many types of cars. This means that if you own a compact car for example, measuring the distance between the car and the flat ground is needed to know if the bottle jack will sit underneath.

The bottle shape and height means that this type of jack is prone to tipping. On flat surfaces, this is not too big of an issue when placing the jack in the right spot. But if the surface is uneven in some way, then it’s far more possible that a bottle jack will tip over compared to a floor jack.

Because of the height and thin nature of the bottle jack, this makes a bottle jack more difficult to use. A floor jack and even the cheaper screw jack offers more stability. You will need to place the bottle jack precisely and ensure that the ground is flat so you can use it properly. For those who have physical issues that makes it more difficult to kneel, sit, or lay down to place the jack, you may want to consider another type for your vehicle.

Should You Get a Bottle Jack? 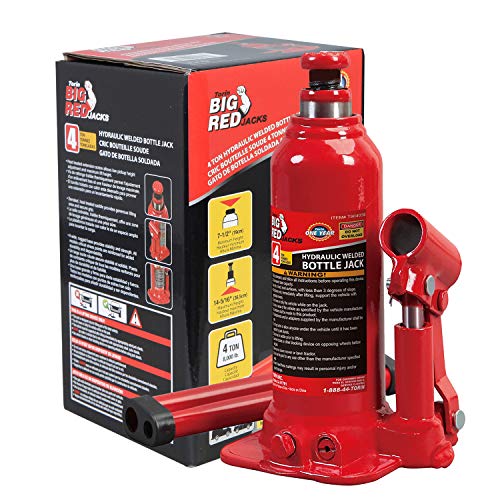 For those who have limited storage space in their trucks, SUVs, or vans, then a bottle jack is a great choice. It is also relatively inexpensive compared to a floor jack. However, because of their height and thin nature they have a tendency to fall over when used on uneven ground. Because they take more skill to use, a floor jack may be a better alternative if you have the room to store it.

Founder of HandymanGuides.com and self-proclaimed “Mr. Fix-It”, Mike has countless years of experience building and tinkering with everything under the sun. He works as a local repair guy near Santa Monica, CA and when he’s not spackling drywall, he enjoys spending time with his wife and 2 daughters.

HandymanGuides.com is a participant in the Amazon Services LLC Associates Program, an affiliate advertising program designed to provide a means for sites to earn advertising fees by advertising and linking to Amazon.com.